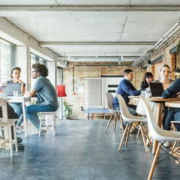 The Stats on Co-working Spaces Are Even Better Than What They Seem. Co-working spaces are creating prosperity for many more people than the entrepreneurs renting offices.

Co-working is often considered a millennial venture — strictly for those who are young, starting out and crave the unstructured work environment.

While co-working may have begun in this demographic, this is less and less true as co-working becomes increasingly popular. All kinds of workers are realizing they can have a flexible and diverse working environment without sacrificing the professionalism of the office.

As someone who has been in the game for a while now — we opened our first co-working space in 2010 — I have seen the change firsthand.

Each year, we survey our members to find out how we’re doing — and how they’re doing. This year’s survey came back with a clear message about the health of the co-working community. In short, co-working spaces are proving to be economic engines that produce prosperity for owners, employees and service providers alike. Below are some recent findings that shatter the perceptions of co-working spaces.

Not just for solo artists.
More and more, co-working is becoming group-oriented. It is a common misperception that co-working spaces are filled with solo entrepreneurs desperate for some social interaction. Our most recent member survey demonstrated that this is definitely not the case. Of those surveyed:

Co-workers are thriving and hiring.
Another co-working myth is that co-working members are small operations who intend to stay that way. Reality? Co-working spaces act as accelerators for business growth. The constant interaction with outside companies allows for natural networking opportunities, helping businesses find new clients, customers, talent and collaboration opportunities that fast-track growth. Out of our survey respondents, roughly 3/4 of employers and 1/3 of individuals expect to add new employees in 2018.

Age of business.
As mentioned before, co-working is not just for the fresh-faced startup, as is a common perception. Members often include a considerable portion of experienced business owners. From our survey, among employer respondents:

This site uses cookies. By continuing to browse the site, you are agreeing to our use of cookies.

We may request cookies to be set on your device. We use cookies to let us know when you visit our websites, how you interact with us, to enrich your user experience, and to customize your relationship with our website.

Click on the different category headings to find out more. You can also change some of your preferences. Note that blocking some types of cookies may impact your experience on our websites and the services we are able to offer.

These cookies are strictly necessary to provide you with services available through our website and to use some of its features.

Because these cookies are strictly necessary to deliver the website, refusing them will have impact how our site functions. You always can block or delete cookies by changing your browser settings and force blocking all cookies on this website. But this will always prompt you to accept/refuse cookies when revisiting our site.

We fully respect if you want to refuse cookies but to avoid asking you again and again kindly allow us to store a cookie for that. You are free to opt out any time or opt in for other cookies to get a better experience. If you refuse cookies we will remove all set cookies in our domain.

We provide you with a list of stored cookies on your computer in our domain so you can check what we stored. Due to security reasons we are not able to show or modify cookies from other domains. You can check these in your browser security settings.

These cookies collect information that is used either in aggregate form to help us understand how our website is being used or how effective our marketing campaigns are, or to help us customize our website and application for you in order to enhance your experience.

If you do not want that we track your visit to our site you can disable tracking in your browser here:

We also use different external services like Google Webfonts, Google Maps, and external Video providers. Since these providers may collect personal data like your IP address we allow you to block them here. Please be aware that this might heavily reduce the functionality and appearance of our site. Changes will take effect once you reload the page.

The following cookies are also needed - You can choose if you want to allow them: