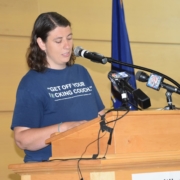 Executive Director & Founder, Monique Priestley, had the honor and privilege of speaking at this year’s 2nd Annual Vermont Leadership Summit (at 38:50 in video below), put on by the Vermont Council on Rural Development. Transcript of Monique’s contribution to the opening “spark stories” here:

This weekend I volunteered as a mentor for this incredible cultural entrepreneurship program that spends a week at Galusha Hill Farm in Topsham. It is hands down the most impressive program that I have ever seen in action. One of the most surprising aspects is that among amazing individuals that are transforming their cities and towns, they all have some degree of imposter syndrome.

I feel imposter syndrome deeply every day. I am someone who will show up, dive into the work, ask questions, and figure things out along the way. In many ways, I don’t know what the hell I’m doing, but I love the challenge of figuring it out – especially when it impacts others. I feel failure when I don’t anticipate every little thing… some may just call that learning. I am a learner that goes all in.

In late 2016, our Main Street was suffering. One of our key businesses, a department store, had gone out of business. Across the street, a global oil company bought out a family business that spanned the block and said they’d keep everything the same – and then left town as soon as the papers were signed. I was on 15 or so boards at the time and every single meeting was discussing what we were going to do. My remote full-time job was in Seattle and I was starting to view it as an escape route.

I went to one of our Business Association socials. The depression was palpable. Previously, I had told a few close friends of an idea I had to create a multipurpose space. Most people smiled, but blew it off. I myself considered it a retirement goal. A mentor of mine came up to me at the gathering and said, “I think it’s time to share your idea.” There was instant buzz, more drinks were ordered, and we sat around talking excitedly.

I went straight to my friend Sam’s house. I didn’t have any money and didn’t have any idea how to pull this off. He said, “You just helped me start a nonprofit – you know that’s a possibility.” I decided I would see if there was any interest in a shared space, what people might pay, and what they might use it for. I left Sam’s, sent out a survey, and Googled “How to Start a Nonprofit”. In 48 hours, I received 85 responses of people who had a critical need for what I was suggesting. I met with each of them one-by-one which led to further coffee dates and dinner with their friends and family. By the time we opened our doors, I had talked to 300 or so people and based everything from furniture to floor plans on those conversations.

I spent the first half of last year raising $100,000 in startup funds. I received a lot of help and had an amazing board to advise me. I had people reviewing documents, listening to my pitch, making email introductions, donating money, giving advice. People like Paul Costello and Ted Brady opened doors and knocked down walls that I had been banging my head against for months. Vermont Community Foundation, Jack & Dorothy Byrne, building owners Vin and Angela Wendell, and many others made investments that made everything possible. I realized very quickly that every effort I had ever volunteered for, every networking dinner I had ever gone to, and everyone in my circle had opened up an entire world in the State of Vermont that I hadn’t dreamt was there. And more than anything, it made me feel incredibly proud to be a Vermonter – to live among strong people who can really pull together.

We opened in mid October as a community-based coworking, maker, conference, event, and gallery space. Our year-end goals were to have 25 monthly members and to serve 1000 people. In 10 months we are at 33 members and have served 5000 people. We have hosted coworkers, kids yoga, Renaissance workshops, business programming, meetups, a senate hearing, youth social justice dinners, and any number of other things.

The Space has taken directions I never would have expected. It has transformed lives. The coolest thing about The Space is that I get people from town as well as all over VT, NH, and MA visiting, calling, and emailing, figuring out how they can create a similar space, open a small business, or pursue any number of random life goals. They saw energy and it awakened something in them.

Every one of our small towns needs that energy. They need someone taking charge and changing the status quo. Current leadership needs to mentor, listen to new ideas, and when the time comes, nudge people to step up. We need to invest in creativity, collaboration, and an atmosphere the encourages someone to take a chance. There are so many efforts that happen behind the scenes in small towns and if that energy and spirit dies, the Vermont we know will cease to exist. There is power in community, in small town grit, and in good old New Englander ingenuity. We have so much potential to do amazing things.

Every single person in this room is a part of that. I know it doesn’t always feel that way. It sometimes gets lonely to care. To show up. But hang in there, even in those moments where you feel like you don’t know what the hell you’re doing. At some critical moment, all the dots will connect and all of your work will make sense. Your potential for impact is very real.

This site uses cookies. By continuing to browse the site, you are agreeing to our use of cookies.

We may request cookies to be set on your device. We use cookies to let us know when you visit our websites, how you interact with us, to enrich your user experience, and to customize your relationship with our website.

Click on the different category headings to find out more. You can also change some of your preferences. Note that blocking some types of cookies may impact your experience on our websites and the services we are able to offer.

These cookies are strictly necessary to provide you with services available through our website and to use some of its features.

Because these cookies are strictly necessary to deliver the website, refuseing them will have impact how our site functions. You always can block or delete cookies by changing your browser settings and force blocking all cookies on this website. But this will always prompt you to accept/refuse cookies when revisiting our site.

We fully respect if you want to refuse cookies but to avoid asking you again and again kindly allow us to store a cookie for that. You are free to opt out any time or opt in for other cookies to get a better experience. If you refuse cookies we will remove all set cookies in our domain.

We provide you with a list of stored cookies on your computer in our domain so you can check what we stored. Due to security reasons we are not able to show or modify cookies from other domains. You can check these in your browser security settings.

These cookies collect information that is used either in aggregate form to help us understand how our website is being used or how effective our marketing campaigns are, or to help us customize our website and application for you in order to enhance your experience.

If you do not want that we track your visit to our site you can disable tracking in your browser here:

We also use different external services like Google Webfonts, Google Maps, and external Video providers. Since these providers may collect personal data like your IP address we allow you to block them here. Please be aware that this might heavily reduce the functionality and appearance of our site. Changes will take effect once you reload the page.

The following cookies are also needed - You can choose if you want to allow them: